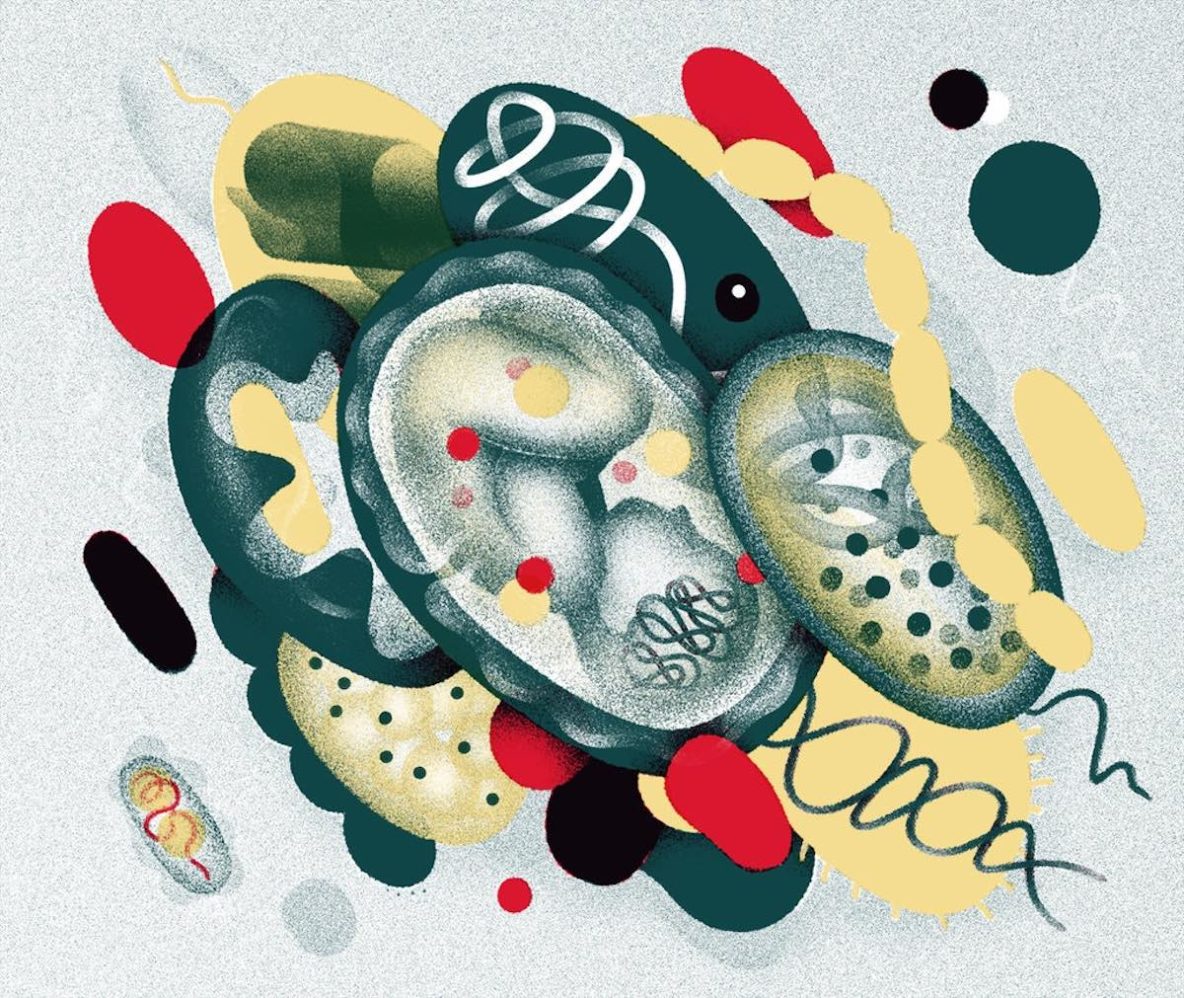 The body’s microbial community may influence the brain and behavior, perhaps even playing a role in dementia, autism and other disorders.

In 2014 John Cryan, a professor at University College Cork in Ireland, attended a meeting in California about Alzheimer’s disease. He wasn’t an expert on dementia. Instead, he studied the microbiome, the trillions of microbes inside the healthy human body.

Dr. Cryan and other scientists were beginning to find hints that these microbes could influence the brain and behavior. Perhaps, he told the scientific gathering, the microbiome has a role in the development of Alzheimer’s disease.

The idea was not well received. “I’ve never given a talk to so many people who didn’t believe what I was saying,” Dr. Cryan recalled.

A lot has changed since then: Research continues to turn up remarkable links between the microbiome and the brain. Scientists are finding evidence that microbiome may play a role not just in Alzheimer’s disease, but Parkinson’s disease, depression, schizophrenia, autism and other conditions.

For some neuroscientists, new studies have changed the way they think about the brain.

One of the skeptics at that Alzheimer’s meeting was Sangram Sisodia, a neurobiologist at the University of Chicago. He wasn’t swayed by Dr. Cryan’s talk, but later he decided to put the idea to a simple test.

He and his colleagues gave antibiotics to mice prone to develop a version of Alzheimer’s disease, in order to kill off much of the gut bacteria in the mice. Later, when the scientists inspected the animals’ brains, they found far fewer of the protein clumps linked to dementia.

Just a little disruption of the microbiome was enough to produce this effect. Young mice given antibiotics for a week had fewer clumps in their brains when they grew old, too.

“I never imagined it would be such a striking result,” Dr. Sisodia said. “For someone with a background in molecular biology and neuroscience, this is like going into outer space.”

Following a string of similar experiments, he now suspects that just a few species in the gut — perhaps even one — influence the course of Alzheimer’s disease, perhaps by releasing chemical that alters how immune cells work in the brain.

He hasn’t found those microbes, let alone that chemical. But “there’s something’s in there,” he said. “And we have to figure out what it is.”

‘It was considered crazy’

Scientists have long known that microbes live inside us. In 1683, the Dutch scientist Antonie van Leeuwenhoek put plaque from his teeth under a microscope and discovered tiny creatures swimming about.

But the microbiome has stubbornly resisted scientific discovery. For generations, microbiologists only studied the species that they could grow in the lab. Most of our interior occupants can’t survive in petri dishes.

In the early 2000s, however, the science of the microbiome took a sudden leap forward when researchers figured out how to sequence DNA from these microbes. Researchers initially used this new technology to examine how the microbiome influences parts of our bodies rife with bacteria, such as the gut and the skin.

Few of them gave much thought to the brain — there didn’t seem to be much point. The brain is shielded from microbial invasion by the so-called blood-brain barrier. Normally, only small molecules pass through.

“As recently as 2011, it was considered crazy to look for associations between the microbiome and behavior,” said Rob Knight, a microbiologist at the University of California, San Diego.

He and his colleagues discovered some of the earliest hints of these links. Investigators took stool from mice with a genetic mutation that caused them to eat a lot and put on weight. They transferred the stool to mice that had been raised germ-free — that is, entirely without gut microbiomes — since birth.

After receiving this so-called fecal transplant, the germ-free mice got hungry, too, and put on weight.

Altering appetite isn’t the only thing that the microbiome can do to the brain, it turns out. Dr. Cryan and his colleagues, for example, have found that mice without microbiomes become loners, preferring to stay away from fellow rodents.

The scientists eventually discovered changes in the brains of these antisocial mice. One region, called the amygdala, is important for processing social emotions. In germ-free mice, the neurons in the amygdala make unusual sets of proteins, changing the connections they make with other cells.

Studies of humans revealed some surprising patterns, too. Children with autism have unusual patterns of microbial species in their stool. Differences in the gut bacteria of people with a host of other brain-based conditions also have been reported.

But none of these associations proves cause and effect. Finding an unusual microbiome in people with Alzheimer’s doesn’t mean that the bacteria drive the disease. It could be the reverse: People with Alzheimer’s disease often change their eating habits, for example, and that switch might favor different species of gut microbes.

Fecal transplants can help pin down these links. In his research on Alzheimer’s, Dr. Sisodia and his colleagues transferred stool from ordinary mice into the mice they had treated with antibiotics. Once their microbiomes were restored, the antibiotic-treated mice started developing protein clumps again.

“We’re extremely confident that it’s the bacteria that’s driving this,” he said. Other researchers have taken these experiments a step further by using human fecal transplants.

If you hold a mouse by its tail, it normally wriggles in an effort to escape. If you give it a fecal transplant from humans with major depression, you get a completely different result: The mice give up sooner, simply hanging motionless.

As intriguing as this sort of research can be, it has a major limitation. Because researchers are transferring hundreds of bacterial species at once, the experiments can’t reveal which in particular are responsible for changing the brain.

Now researchers are pinpointing individual strains that seem to have an effect.

To study autism, Dr. Mauro Costa-Mattioli and his colleagues at the Baylor College of Medicine in Houston investigated different kinds of mice, each of which display some symptoms of autism. A mutation in a gene called SHANK3 can cause mice to groom themselves repetitively and avoid contact with other mice, for example.

In another mouse strain, Dr. Costa-Mattioli found that feeding mothers a high-fat diet makes it more likely their pups will behave this way.

When the researchers investigated the microbiomes of these mice, they found the animals lacked a common species called Lactobacillus reuteri. When they added a strain of that bacteria to the diet, the animals became social again.

Dr. Costa-Mattioli found evidence that L. reuteri releases compounds that send a signal to nerve endings in the intestines. The vagus nerve sends these signals from the gut to the brain, where they alter production of a hormone called oxytocin that promotes social bonds.

Other microbial species also send signals along the vagus nerve, it turns out. Still others communicate with the brain via the bloodstream.

It’s likely that this influence begins before birth, as a pregnant mother’s microbiome releases molecules that make their way into the fetal brain.

Mothers seed their babies with microbes during childbirth and breast feeding. During the first few years of life, both the brain and the microbiome rapidly mature.

To understand the microbiome’s influence on the developing brain, Rebecca Knickmeyer, a neuroscientist at Michigan State University, is studying fMRI scans of infants.

In her first study, published in January, she focused on the amygdala, the emotion-processing region of the brain that Dr. Cryan and others have found to be altered in germ-free mice.

Dr. Knickmeyer and her colleagues measured the strength of the connections between the amygdala and other regions of the brain. Babies with a lower diversity of species in their guts have stronger connections, the researchers found.

Does that mean a low-diversity microbiome makes babies more fearful of others? It’s not possible to say yet — but Dr. Knickmeyer hopes to find out by running more studies on babies.

As researchers better understand how the microbiome influences the brain, they hope doctors will be able to use it to treat psychiatric and neurological conditions.

It’s possible they’ve been doing it for a long time — without knowing.

In the early 1900s, neurologists found that putting people with epilepsy on a diet low in carbohydrates and high in protein and fat sometimes reduced their seizures.

Epileptic mice experience the same protection from a so-called ketogenic diet. But no one could say why. Elaine Hsiao, a microbiologist at the University of California, Los Angeles, suspected that the microbiome was the reason.

To test the microbiome’s importance, Dr. Hsiao and her colleagues raised mice free of microbes. When they put the germ-free epileptic mice on a ketogenic diet, they found that the animals got no protection from seizures.

But if they gave the germ-free animals stool from mice on a ketogenic diet, seizures were reduced.

Dr. Hsiao found that two types of gut bacteria in particular thrive in mice on a ketogenic diet. They may provide their hosts with building blocks for neurotransmitters that put a brake on electrical activity in the brain.

It’s conceivable that people with epilepsy wouldn’t need to go on a ketogenic diet to get its benefits — one day, they may just take a pill containing the bacteria that do well on the diet.

Sarkis Mazmanian, a microbiologist at Caltech, and his colleagues have identified a single strain of bacteria that triggers symptoms of Parkinson’s disease in mice. He has started a company that is testing a compound that may block signals that the microbe sends to the vagus nerve.

Dr. Mazmanian and other researchers now must manage a tricky balancing act. On one hand, their experiments have proven remarkably encouraging; on the other, scientists don’t want to encourage the notion that microbiome-based cures for diseases like Parkinson’s are around the corner.

That’s not easy when people can buy probiotics without a prescription, and when some companies are willing to use preliminary research to peddle microbes to treat conditions like depression.

“The science can get mixed up with what the pseudoscientists are doing,” said Dr. Hsiao.

Dr. Costa-Mattioli hopes that L. reuteri some day will help some people with autism, but he warns parents against treating their children with store-bought probiotics. Some strains of L. reuteri alter the behavior of mice, he’s found, and others don’t.

Dr. Costa-Mattioli and his colleagues are still searching for the most effective strain and figuring out the right dose to try on people. “You want to go into a clinical trial with the best weapon, and I’m not sure we have it,” he said.

Katarzyna B. Hooks, a computational biologist at the University of Bordeaux in France, warned that studies like Dr. Costa-Mattioli’s are still unusual. Most of these findings come from research with fecal transplants or germ-free mice — experiments in which it’s especially hard to pinpoint the causes of changes in behavior.

“We have the edges of the puzzle, and we’re now trying to figure out what’s in the picture itself,” she said.